HOUSE PRICES RISE BY 1.8% IN OCTOBER 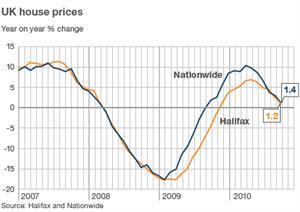 8% IN OCTOBER House prices in the UK rose by 1.

8% in October compared with the previous month - but this followed a big drop a month earlier, the Halifax has said.

The lender, part of the Lloyds Banking Group, said that the less volatile three-month on three-month comparison showed property values dropped by 1.

Monthly changes in prices had been a mixed picture, the lender said, but it is not predicting a sustained fall.

"An increase in the number of properties available for sale in recent months, together with a decline in demand, has put some downward pressure on prices in recent months," said Halifax housing economist Martin Ellis.

"We do not believe that prices are set to fall sharply over a sustained period.

"Volatile A month ago, the Halifax survey produced a surprising figure that house prices had dropped by 3.

6% in September, compared with the previous month - the biggest drop on record.

However, the lender, and analysts, warned at the time that this was likely to be a blip and should not be regarded as a measure of long-term price trends.

This seems to have been corrected with the monthly rise in October, with the figures affected by low levels of activity in the market.

The less volatile quarter-on-quarter measure has shown a smoother trend - that prices have remained relatively static or have fallen slightly.

In September this showed a 0.

In October, the decline was 1.

2% higher than a year ago, continuing a downward trend from 6.

Continue reading the main story “ Start Quote The housing market really does not seem to have got much going for it at the moment” End Quote Howard Archer IHS Global Insight This annual figure is calculated by the Halifax by comparing the preceding three months with the same three months a year earlier, arguing that this irons out any short-term fluctuations.

The Nationwide said that such parity could be reached by the end of 2010.

However, the Halifax said prices would not see sustained sharp falls in the coming months - owing primarily to low interest rates.

The Bank Rate has stood at 0.

5% since March last year, leading to relatively cheap repayments for many mortgage holders, especially those on tracker deals.

"Interest rates are likely to remain very low for an extended period, which will continue to support the improved mortgage affordability position for homeowners," Mr Ellis said.

Howard Archer, chief UK economist at IHS Global Insight, said: "The latest housing market data and surveys have been consistently weak, and the housing market really does not seem to have got much going for it at the moment.