House Prices up for Fifth Month In a Row

House Prices up for Fifth Month In a Row House prices have risen by 8. 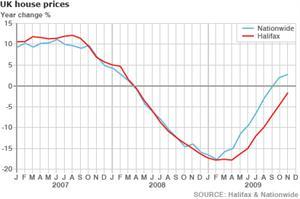 5% since April, the Halifax says House prices have risen for the fifth month in a row, says the Halifax, one of the UK's biggest mortgage lenders.

Its latest survey says prices went up by 1.

Although that is still 1.

2% up since the start of the year.

The Halifax also predicted that house prices were likely to be flat over the course of 2010 if more homes were put up for sale.

"The recovery in house prices since the spring has been driven by increased demand for property, largely due to the improvement in affordability for existing homeowners and first-time buyers who can raise the necessary deposit," said Martin Ellis, economist at the Halifax.

"Somewhat higher demand has combined with a low level of properties available for sale to push up prices.

"Further ahead, the prospects for the market will depend on how the UK economy evolves and whether there is a significant increase in the supply of properties for sale," he added.

Rising salesOn the Halifax's calculations, house prices reached their low point in April this year, since when they have risen by 8.

The likelihood is that prices will continue to rise in the early part of 2010Simon Rubinsohn, Rics Will house prices keep rising in 2010? Up to that point prices had slumped by 23% in the months since August 2007, when the onset of the international banking crisis burst the UK's property price bubble.

The Halifax's figures indicate that the recovery in both prices and sales that has been experienced since the spring is continuing.

According to the most recent figures from HM Revenue & Customs (HMRC), completed house sales in October stood at 90,000 - 13% higher than the same month last year.

And mortgage approvals, as measured by the Bank of England, have risen every month this year and in October were 79% higher than a year ago.

However, Mr Ellis noted that despite this improvement, approvals still remain 56% below their late 2006 peak.

"Despite the probable ending of the extended zero rate band for stamp duty at the end of the year, the likelihood is that prices will continue to rise in the early part of 2010," said Simon Rubinsohn, chief economist at the Royal Institution of Chartered Surveyors (Rics).

"Although the fresh supply of property is beginning to pick up, it is continuing to lag behind the increase in buyer interest which suggests that, at least in the near term, the market will continue to tighten," he added.