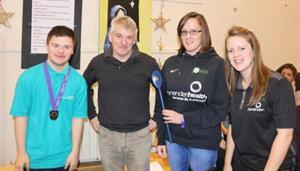 The York Soup project is a micro granting dinner which aims to celebrate and support local community based projects in York.

It is modelled on Detroit Soup, which has raised tens of thousands of dollars for good causes in recent years.

The way it works is that attendees turn up, pay £10 for a ticket, and receive homemade soup, bread and (usually) cake and a vote.

They eat and listen to four presentations from either individuals or organisations with ideas for improving York, and subjects have so far ranged from education and urban agriculture to social justice.

Each presenter has four minutes to explain their idea, and then they take questions from the audience.

After all of the presentations have been heard, attendees vote on the project which they think will benefit York and the community the most.

The votes are counted up at the end of the night and the winner receives all of the money raised that evening to carry out their project, and they come back to a future York Soup dinner to report on their project’s progress.

During the event the attendees have the opportunity to eat, talk to other people in the community, share resources, hear about local projects in York and generally enjoy the creative atmosphere.

The latest event was the third York Soup project event, and was held at the Spurriergate Centre in York on Wednesday 2nd December.

It was won by Dan Beech from York charity The Joseph Trust.

Mr Beech pitched for funds to create a dedicated growing space for Danesgate Community students to oversee the process of looking after their own food.

As a result of winning the event, the trust received £750 to implement its plans, as well as the “York Soup Spoon” trophy, and students at Danesgate Community’s kitchen and canteen can now look forward to growing, cooking and preparing their own food.

The other three presentations on the night were from Treasure Chest Breastfeeding Group, Door 84 and Christmas in Need.

Hannah Higginson from City of York Athletic Club also spoke at the event to explain how their winnings from September’s York Soup had supported training for coaches and equipment.

Mora Scaife from York Soup’s organising committee said: "The Spurriergate Centre hosted the event and the soup was delicious! Greg McGee of art gallery According to McGee was on form as the evening’s MC, and his quick wit and inimitable style was a key ingredient of a successful evening.

“York Soup would like to thank everyone at the Spurriergate Centre, Hudson Moody Estate Agents, Greg McGee for leading from the front, Sophie of York Cocoa House for the delicious cakes, Mike Hawtin for photography and of course everyone who bought a ticket!" Commenting on the event, Ben Hudson, Managing Partner of Hudson Moody said: “Hudson Moody was very pleased to sponsor this event, which was a great opportunity to support small, local community projects.

The amount of money received from these events can make a huge difference to people in the local community.

It is also a great opportunity for people in York to meet, socialise, network, learn about what is going on in the community and eat and drink.

” To find out more about the York Soup Project please visit https://yorksoupproject.

The next event will be in the New Year, and the project is always looking for sponsors, volunteers, donations, musicians, artists and other support.

Photo taken from The Press.