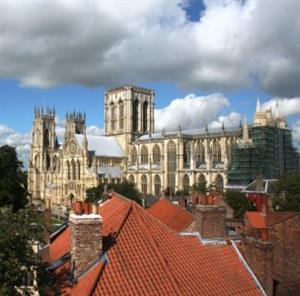 This will retain 9000sq ft of retail space at ground floor and basement level and create 14 new apartments, several with spectacular Minster views, on the upper floors.

Hudson Moody in York is advising Harrison on the residential element of the £5m scheme.

Says S Harrison director David Clancy: “This is a rare opportunity to acquire and return to productive use such a quality property in such a prestigious location at the heart of the city.

“With some of the retail space and much of the upper floor office space currently underutilised, there is a great potential to revitalise the retail element and develop the rest of the space in line with the city’s ‘living above the shop’ aspirations.

With spectacular Minster views we expect no shortage of interest in the planned one and two-bed apartments, if councillors approve our proposals.

”Initial plans for the site have already been drawn up.

and it is hoped that a planning application will be submitted later this year.

Says City of York Council leader, James Alexander: “This is great news for the city and an indication that York is very much ‘open for business’.

I’m delighted that an award winning developer with strong York connections is committed to retaining retail and leisure provision in the centre of York and creating new homes in currently unused office space.