Icy start to 2010 cools markets UK house prices fell for the first time in 10 months in February as icy weather put off house hunters, the Nationwide building society has said. 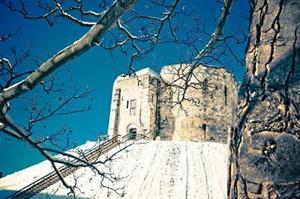 Average property values dropped by 1% compared with January, with the average home worth £161,320.

But the annual rate of increase accelerated to 9.

2% because prices dropped faster a year ago.

Mortgage lending also slowed at the start of the year owing to the hangover from the stamp duty holiday.

Blip?The three-month on three-month comparison is generally regarded as a smoother indication of house price trends.

6% increase in the three months to February, having slowed from 2% in January and from the peak of 3.

Prices surprised many commentators by remaining relatively buoyant throughout the second half of 2009.

The Nationwide said it was difficult to gauge whether February's fall in prices was a "temporary blip" or the start of a new downward trend.

"There is evidence from a range of indicators that the market may have lost momentum in early 2010 as the stamp duty holiday ended and house hunters were obstructed by the icy weather," said Martin Gahbauer, chief economist for the Nationwide.

"Even without the impact of stamp duty changes and the snowy weather, it would have been surprising to see house prices maintain the very strong upward momentum seen for most of 2009.

"Little increase in household incomes and relatively high unemployment could also have put the brakes on house prices.

Mr Gahbauer said that it was a "positive development" for house prices not to race away from these economic fundamentals.

Mortgage lendingThe number of new buyers making enquiries about homes dropped at the start of the year.

Properties in sought-after locations are in short supply Recent figures from the Council of Mortgage Lenders also showed that gross lending for home loans fell by 32% in January compared with December, to a 10-year low of £9.

This lack of buyer demand fed through to the drop in agreed prices in February, Mr Gahbauer said.

There has been widespread agreement among commentators that the slowdown in mortgage lending at the start of the year was the result of bad weather and the end of stamp duty relief.

The stamp duty threshold dropped back to £125,000 on 1 January, prompting a rush on mortgage approvals and completed home sales in the final months of 2009.

The government concession, which had temporarily pushed the threshold up to £175,000 for just over a year, had been aimed at halting the rapid slump in the property market.

As a result, first-time buyers would welcome any slow down or fall in house prices, as they were among the most likely to suffer when this relief ended.

Mr Gahbauer said that, with the Bank rate at a record low of 0.

5%, mortgage borrowers were sticking to variable rate home loans - rather than signing up to fixed-rate deals - as they expected interest rates to stay low.

In a separate survey, estate agent Knight Frank said strong demand for second homes could cause house prices to more than double in sought-after areas.