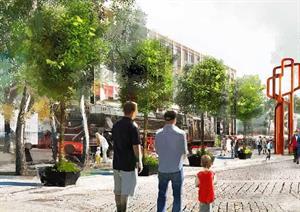 The York Central Scheme would see the National Railway Museum (NRM) expanded and enhanced, dramatic changes made to the railway station and would include 120,000 sq m of new high quality office space, 7,000 new jobs, 2,500 new homes and a number of open, vibrant public squares and green spaces.

The regeneration scheme could also see Leeman Road closed or diverted near the National Railway Museum in order to give it space to expand, a new road bridge built into the site from Holgate Road, and a food and cycle bridge built over the main east coast railway line.

The station would get improved access making it more welcoming, and possibly a new entrance facing the National Railway Museum.

All in all, the plans would dramatically transform York for both residents and tourists.

The development site is made up of about 72 hectares of land next to the station in the heart of the city.

It is York’s largest brownfield site and would include the long neglected teardrop-shaped site at the rear of the station, which was granted Enterprise Zone Status in November.

This enables the council to retain additional business rates from any development, meaning it could borrow against future income to fund site infrastructure.

This has hindered previous attempts to market the site and allow the site’s massive potential to be realised.

Additional sections of land would therefore be required in order to complete the project, which will require compulsory purchase orders.

York City Council says that the scheme will have a development value of £623million, and they have earmarked £10million towards the cost of delivering what they have called the “King’s Cross of the North”.

They are working with a number of partners to develop the site, including fellow landowners Network Rail and the National Railway Museum.

The Homes and Communities Agency has also committed £9.

45million towards the scheme.

City of York Council said in a statement: "The estimated infrastructure cost of £78 million - which could be funded as a result of Enterprise Zone status - will unlock the office and homes scheme with a net development value of around £623m".

The Leader of the Council, Chris Steward, said: “The redevelopment of York Central represents a once in a lifetime opportunity to deliver major growth in York.

This will enable us to attract high value jobs, deliver new and much needed sustainable homes and create world-class public spaces which will help define the future for our city.

We will also reduce the pressure to build on York’s Greenbelt.

” A development draft will give York residents and businesses the opportunity to comment early in the New Year.

Commenting on the proposed development, Ben Hudson, Managing Partner of Hudson Moody said: “This is very exciting news and we are very much looking forward to the consultation process starting next month.

Hopefully these long awaited plans will greatly increase the supply of new homes in York, as well as increase the number of job opportunities available and make York an even better place to live than it already is”.

Photo from City of York Council Share on social media