MORTGAGE LENDING SEES SPRING BOUNCE Mortgage lending continued its spring rise into May, according to the British Bankers' Association. 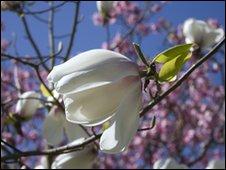 The number of mortgages approved for house purchases rose to its highest level so far this year.

A total of 36,709 loans were approved by the major banks for people buying a property during the month.

It was the third month in a row of rising mortgage approvals, and left the amount outstanding 4.

The BBA represents the High Street banks, which account for 75% of new mortgage lending.

However, that rate of growth is almost half the pace of 2008, when mortgage lending was increasing by 8% a year, and the number of mortgages approved is about half the number seen in pre-financial crisis years.

Households continue to pay off debts, according to the BBA.

"The low interest rate environment is resulting in customers choosing to reduce or pay off borrowing, particularly personal loans, rather than saving," said the BBA's director of statistics, David Dooks.

Re-mortgaging accounted for the lion's share of loan approvals with 24,626 taking out new or replacement loans on their existing property.

The number of home loans approved for house purchases was 35,729 in April, up 685 on March.