OLYMPIC TORCH IN YORK Tuesday's relay will travel 150 miles from Hull to York, where former showjumper Harvey Smith will ride with the flame into York Racecourse. 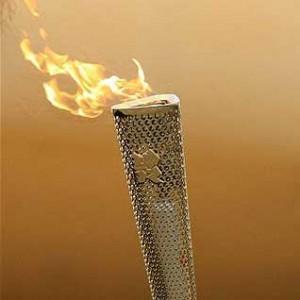 Before that, the flame will also be borne along York's famous city walls.

Torchbearers Philip Jones, 60, from York, and Harrogate's 16-year-old Scott Stockdale will take their torches along part of the walls, which stretch for two-and-a-half miles.

The day will end when Smith, 74, takes his torch into the racecourse, riding novice showjumper Paddy.

He will light the cauldron at the evening celebration.

Smith, often a controversial character during his equestrian career, competed in two Olympic Games and won an individual bronze medal at the 1970 World Championships.

Princess Beatrice's moment greeting the torch will be her second involvement in 2012 events as she also ran in the Olympic Park race in March.

Continue reading the main story London 2012 Olympic torch relay Search maps, check street routes and join in 70 days of live coverage in video, stories and picturesFind out where the Olympic torch is going The first torchbearer of the day just after 07:00 BST was Erica Hughes, 72, from Pocklington, who started at Hull's The Deep aquarium, home to more than 3,500 fish.

She was selected to carry the torch for her voluntary work with a team of medics at an ear, nose and throat clinic in Nepal.

Lewis Birkinshaw, 17, Bradford Academy's current citizen of the year, will carry the torch at Fountains Abbey in Ripon, which is a world heritage site.

Other torchbearers include George Stocker, 13, from Fairfield, who was diagnosed with a brain tumour in October 2008.

He had 48 weeks of chemotherapy and has gone on to raise £50,000 for Candlelighters charity, to help other children he believes are "more poorly" than himself.

Clive Warley, 74, is carrying the flame through his home town of York.

He was born with spina bifida and supports the Paralympics and special Olympic sports at local, regional and national level.

Another York torchbearer is 34-year-old Luke Young from Dishforth, who will carry the flame along The Shambles.

He was chosen to run with the torch after cycling from London to Paris to raise money for charity.