Snowy January slows sales but prices still rise Activity in the UK housing market was frozen by the snowy weather, although prices continued to rise, according to surveyors. 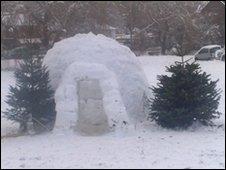 Buying and selling activity fell during the month owing to the extreme weather conditions, the Royal Institution of Chartered Surveyors (Rics) said.

However the group expects a "Spring bounce" in the coming months.

Surveys have suggested that the housing market has begun to recover from a sharp slump over the last six months.

'Chaos'The heavy snowfall and freezing temperatures led to many people working from home at the start of January and, unsurprisingly, led to a slowdown in people viewing homes.

Activity and interest is likely to pick up in the coming months as the market experiences a Spring bounceIan Perry, Rics The Rics survey found that more surveyors reported that buyer inquiries fell, rather than rose, in January.

This was the first result of this kind for 14 months.

Enquiries from new buyers and instructions from sellers also dropped compared with December.

"The cold snap in January clearly has a huge impact upon both supply and demand in the housing market with activity coming to a halt amid the seasonal chaos," said Ian Perry, of Rics.

"Activity and interest is likely to pick up in the coming months as the market experiences a Spring bounce.

"Upward trend?In January, 32% more surveyors reported a rise than a fall in house prices, up from 30% in December.

This was driven in part by a shortage in supply of better quality homes on the market - an issue which has been raised in commentary on other housing market surveys.

This could have a long-term effect on the UK housing market, as greater confidence of price rises could push more sellers into the market, only to cause prices to fall again.

"House prices are likely to rise in the short term but if more supply continues to come onto the market, it is possible that the market will run out of steam in the latter part of the year," Mr Perry said.

The picture is varied in different areas of the UK, the Rics survey found.

However, more surveyors reported price falls than price rises in Wales, Yorkshire and Humberside, and the North of England.