Will Property Prices Keep Rising Through 2010?

Will Property Prices Keep Rising Through 2010? For close observers of the UK's property market, 2009 was a big surprise. 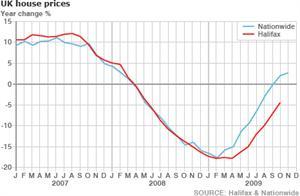 Contrary to almost everyone's expectations, prices started rising in the spring and have kept on going pretty much every month since then.

According to HM Revenue & Customs (HMRC) completed sales rose steadily too, from the rock-bottom level of just 41,000 in January to 90,000 in October.

The Nationwide building society estimates that if prices remain unchanged through December, then they will end the year nearly 6% higher than they started it.

"I am very surprised," says the Nationwide's economist Martin Gahbauer.

"At the start of the year I would have said there was next to no chance of that happening," he says.

"I thought there was every chance that 2008 could have been repeated.

"About-turnThe sudden change in direction brought an end to the sharp downturn of the previous 18 months, in which the banking crisis led to a slump of about 20% in the value of the average UK home.

Employment has been slow to fall, so there has been no drip-feed of forced sellersEd Stansfield, Capital Economics Simon Rubinsohn, chief economist at the Royal Institution of Chartered Surveyors (Rics), has been equally surprised by this about-turn.

"Prices could have fallen further, but government policy has been successful, combined with low interest rates," he says.

"The rise in unemployment has been only half the level seen in the recession of the early 1990s, which has stopped some distressed stock coming on the market.

"The key factor was probably the Bank of England's decision to take its base rate all the way down to 0.

5% by March 2009, in an attempt to stave off the recession and keep the banking system afloat.

This lifted a huge financial burden from millions of home owners, some of whom would otherwise have fallen behind with their mortgage payments and then been threatened with repossession.

"The big influence was the relative resilience of labour markets - employment has been slow to fall, so there has been no drip-feed of forced sellers," he says.

No forecastA year ago the Council of Mortgage lenders (CML) decided not to make a public forecast of house prices for 2009.

For Sale signs have reappeared as sales pick up Its spokesman Bernard Clarke thinks that decision, repeated this year, has been fully justified.

"It's a vindication of our decision not to forecast in such a volatile market," he said.

"No-one forecast the rise this year and it is difficult with such a thin volume of transaction to do something that is reliable.

"So what about 2010?Will prices continue their upward path, slow down, or even fall again?Jonathan Davis, of financial planning firm Armstrong Davis, is certain that the past year has simply been a false dawn.

"There has been an unprecedented level of government stimulus to the economy which has had a positive short-term effect - low interest rates, bank bail outs, the car scrappage scheme and the VAT cut," he says.

"Take away all that and there's nothing holding up the economy," he says.

UncertaintyMr Davis is sure house prices will fall again this coming year by another 10%-15%, mainly in the second half.

I'm looking for an improvement in the number of transactions, but it still doesn't seem like a normal sort of marketMartin Ellis, Halifax "The general election, tax rises, government spending cuts and unemployment above three million - all this will mean a significant rise in repossessions, both residential and buy-to-let," he predicts.

None of the other commentators we asked is as certain that prices will tumble sharply once more.

Ed Stansfield comes closest, believing that house prices are still overvalued and could fall by 10% next year, if unemployment keeps on rising.

But even he is hedging his bets.

"Prices will fall back, the gains this year don't have a lot of foundation," he says.

"But if firms continue trying not to shed labour it is conceivable prices would flat-line or even keep on rising.

"Martin Ellis, economist at the Halifax, thinks the prospects for next year are hard to judge, but he is forecasting that prices will be flat over the whole of the year.

"It depends on the economic recovery, which currently is sluggish," he says.

He thinks prices may be held back if more properties are put up for sale, with sellers encouraged by the price rises seen this past year.

"I'm looking for an improvement in the number of transactions, but it still doesn't seem like a normal sort of market," he says.

StabilisationMartin Gahbauer at the Nationwide has a similar outlook on prices, though he believes the recent price increases should no longer be seen as a blip.

"After seven consecutive months of rises, a stabilisation trend has been established, but I see prices flattening out, with prices by December 2010 about the same as now," he predicts.

And Simon Rubinsohn at Rics agrees that more properties will come onto the market, with some people who had been letting their homes now choosing to sell.

"Looking at our monthly survey and the momentum in the market I still see price rises in the early part of the year, but I don't see prices continuing to rise through the whole of next year; they may flatten out.

"Of all our commentators, Ray Boulger of mortgage brokers John Charcol stood out as the most confident that prices would pick up sooner rather than later.

He too was surprised by how quickly that happened and he thinks sales and prices will stay on that path in 2010.

"There will be a difference between the various indices, but I think the Nationwide will show a 4% rise next year and the Land Registry, which lags behind it, a 9% rise, catching up on some of the increase recorded by the Nationwide this year," he says.

What seems unlikely to change much is the supply of mortgage funds to potential borrowers.

Most first time buyers still need to put down a 25% deposit and just under two thirds of all mortgage deals on offer still specify this.

"It [mortgage rationing] is easing somewhat but it is a slow process," says Bernard Clarke of the CML.