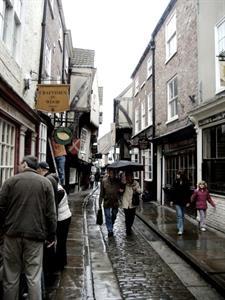 Natural Environment The River Ouse flows directly through the centre of York, and provides a superb natural background to the most magnificent city.

Boat trips go up and down the river, allowing you to see the buildings, bridges and sites from the water, and it looks truly magical as it sparkles in the summer sun.

York was designated as a conservation area in 1968.

It is surrounded by a ring road, which is approximately three miles from the city centre.

This allows traffic to by-pass the city, as the historic city centre is not suitable for traffic.

There are five park and ride sites surrounding the city, allowing visitors to park their cars on the outskirts and finish their journey by bus.

This means that much of the city of York is car-free, which makes walking, shopping, sitting, eating and drinking, and generally living in it a much more pleasant, quiet and less polluted experience.

It also means that if you have children, you can raise them in a much healthier environment than most other cities.

York is located in the Vale of York, which is surrounded by the Pennines, the North York Moors and the Yorkshire Wolds – meaning you don’t have to travel far before you can see some of the finest views and most incredible countryside in the whole of the UK! Built Environment York’s 2000 year history is evident in the wide range of beautiful buildings dotted throughout the city.

Most prominent of these is York Minister, the largest Gothic cathedral in Northern Europe.

There are also the remains of York Castle and the city’s medieval walls, which are the most complete defences in all of England.

There are a wide range of other historical buildings as well, including Fairfax House, the Mansion House and the Treasurer’s House to name just a few.

York is also home to a large number of beautiful medieval churches and pubs (one pub for each day of the year if the legends are to be believed).

Perhaps the most charming part of York’s built environment though are some of the routes through the city.

The Snickelways are narrow, pedestrian only streets, and the Shambles, which has been named as Britain’s most picturesque street, is a narrow medieval street consisting of shops, boutiques and tea rooms.

To read more about why York is such a great place to live, click here to read our online guide.