York – a city steeped in history

York – a city steeped in history Anyone who lives in York or has just visited for the day cannot help but notice that it is an incredibly historic place. 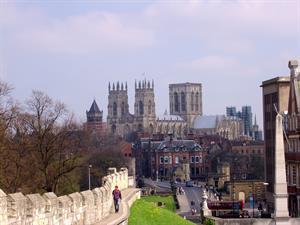 It has a rich heritage dating back across 2000 years, which is obvious throughout the city and the buildings and attractions therein, and helps to make it such a fantastic place to live.

Here, we look briefly at its history.

Eboracum York was founded by the Romans in 71AD when the Roman Ninth Legion conquered the Brigantes tribe and built a fortress near to where the River Ouse meets the River Foss.

It was then known as Eboracum.

Work then began on the walls that still encircle the city today and which people can still stroll along.

They are the most complete defences in England, retaining all of their principle gateways.

York was abandoned by the Romans when they left Britain at the beginning of the fifth century.

Jorvik York was conquered by the Danish army on 1st November 866 – All Saints Day.

It was known as Jorvik and became the capital of the Viking kingdom in the North of England.

It was a major Viking river port until its last Viking ruler, Eric Bloodaxe, was driven away from the city in 954.

Nowadays, the Jorvik Viking Centre allows you to experience York as it was a thousand years ago in a visitor centre built on the site of the houses and workshops of the Viking city.

This authentic recreation includes the layout of the houses, the language of the inhabitants and even the smells of the cooking and the cesspits! Medieval York Following the Norman Conquest, William the Conqueror marched on York in 1068, building two castles to control the rebels of the north.

Clifford’s Tower, the keep of York Castle, can still be visited today.

The castle was twice burnt to the ground, before being rebuilt by Henry III in the 13th century.

Along with Clifford’s Tower, the other remaining buildings of York Castle are York Castle Museum and the Crown Court.

York Prison, which was part of the castle, was demolished in 1935.

Work began on York’s most prominent visitor attraction, the famous York Minster, in 1080.

It is one of the world’s most magnificent cathedrals and is the largest Gothic cathedral in northern Europe.

York began to prosper in the 12th century, becoming a major trading route because of its proximity to the Great North Road (largely the modern day A1).

It declined during Tudor times following Henry Tudor’s defeat of Richard III (Richard of York) and the Dissolution of the Monasteries, but became a social and cultural centre for wealthy northerners following the Restoration of the Monarchy in 1660 and the subsequent Hanoverian period.

Industrial revolution However, it was the railways which restored York to its former glory.

The first train left York in 1839, and by 1877 York station was the largest in the country.

The arrival of the Railway era attracted tourists and theatregoers from all around the country.

Nowadays you can visit the National Railway Museum, which is the largest of its kind in the world, and is a free day out for all the family.

York became a major railway centre by the late nineteenth century, establishing engineering in the city as one of the two major industries by 1900.

The other one was confectionary, with Rowntree’s founded in York in 1862, and Terry’s of York created in 1828.

York’s prosperity was based on chocolate and the railways up until the 1980s, but most of the railway industry has now gone.

Modern day Since the 1960s, York has been a major UK centre for tourism, capitalising on its rich history.

It was designated as a conservation area in 1968 and is a British Heritage City, a title shared with five other British cities – Bath, Carlisle, Chester, Oxford and Stratford – a group of likeminded British cities sharing 2000 years of history.

It has won numerous tourism related accolades in recent years, most notably European Tourism City of the Year June 2007, when it beat off competition from 130 other European cities.

To learn more about why York is such a great place to live, please click here to read Why live in York?  Share on social media