York: Fun, food and shopping We recently looked at ten things to do in York at the weekend and have also considered the history of York and how it’s reflected throughout the city in its buildings, museums and tourist attractions. 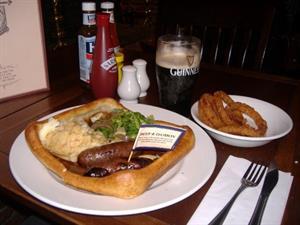 But what about the more everyday things that people want to do in their home city, like going for a drink or a meal, going to the cinema, or just shopping? Fancy a pint? Legend has it that there are 365 pubs in York, one for each day of the year.

Whether or not this is true we don’t know, but there are certainly a lot, ranging from traditional old-world pubs to modern chilled out bars, and they are among some of the best pubs in country, so you could try a different pub each time you fancied a drink and never get bored! A great place to eat York is, of course, famous for Betty’s tea shop, but there is a huge amount more to York than just Betty’s.

York has a wide range of restaurants, many selling local produce, and suiting all tastes and budgets.

Two of the latest restaurants to open in York include The Star Inn The City and The Whippet Inn.

York is so good that it was recently named as Best Gastro Destination in the UK and fifth best in Europe by Trip Advisor, which is the largest online travel review site.

In the Google Street View Awards of 2010, Fossgate – which is full of little independent restaurants selling food from all over the world - was voted as the third best street for food in Britain.

Cafe culture and nightlife York has a thriving and elegant cafe culture to rival some of the great cities of Europe.

Combine that with the numerous festivals that York plays host to throughout the year, the excellent street entertainment, and the wide range of live music venues across the city, in York you have a fantastic destination for a great night out! Cinemas and theatres As with everything in York, the cinemas and theatres are a wonderful combination of old and new, offering something for everyone.

There is a modern, 12-screen multiplex Vue cinema at Clifton Moor Retail Park showing all the latest films as you would expect, but there is also the York Reel Cinema on Blossom Street and the City Screen in the centre of the city, which is an art-house cinema with three screens and luxury seating showing independent, mainstream and international films.

Theatre goers also have plenty of choice, with York playing host to large numbers of amateur dramatic productions and touring theatre groups throughout the year.

The city has two main theatres - the York Theatre Royal and the Grand Opera House, as well as the Friargate Theatre and the Joseph Rowntree Theatre.

Shopping When it comes to shopping, there is something for everyone in York.

There are modern shopping complexes on the outskirts of York at York Designer Outlet, Monks Cross and Clifton Moor.

There is the open-air market in the city centre, and regular farmers markets selling local produce.

York is also home to a number of major retail chains and big-name high street outlets, as well as more specialist independent shops, including designer boutiques and antique shops, many of which are set in York’s medieval and Georgian streets.

Petergate was shortlisted as the Best Shopping Street in the UK in 2011.

All in all, there are over 2,000 stores in York, which offer something for everyone.

Of course, if you wanted to go further afield, York is conveniently situated near to the M1 and the M62, making shopping centres like Meadowhall near Sheffield, and the Trafford Centre near Manchester, easily accessible for a day out.

What more could you want?! For more reasons why you should live in York, click here to read our guide.