YORK IS SECOND FASTEST GROWING CITY IN THE UK

YORK IS SECOND FASTEST GROWING CITY IN THE UK YORK is the second-fastest growing city in the UK in a flagship report which analysed how it is facing up to the economic storm. 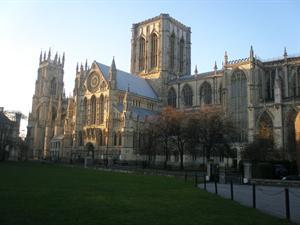 The Cities Outlook 2011 rundown, published today by a top think-tank, also marked out the city as being at the forefront of places whose economies are best placed to emerge from the gloom of the credit crunch.

But it also warned the city could lose between 1,700 and 2,400 public sector jobs between now and 2014/15 as Government spending cuts hit home.

It placed York second behind Milton Keynes for population growth between 1999 and 2009, making it the only northern city in the top ten, as the number of people living there rose from 177,100 to 198,800 during this time.

The independent Centre For Cities group also said York was less likely to be hit by welfare cuts than anywhere else and gave it a top-ten ranking for the number of residents claiming benefits.

However, the report also showed workers in the city are taking home £34 less in their weekly pay packets than the UK average and weekly wage growth had slumped between 2006 and 2010, although salary levels in the city were high compared with other areas.

York was also among the top ten cities for low levels of inequality, the top five for the number of residents with high-level qualifications and the top 20 in terms of the percentage of working-age people with jobs.

9 per cent of working-age residents had no formal qualifications.

The outlook for potential public sector job cuts were based on two scenarios drawn up by the Office For Budget Responsibility, with the higher figure of 2,400 based on 490,000 national losses by 2014/15 and the lower figure of 1,700 dictated by a more optimistic recent prediction of 330,000 losses across the UK.

Roger Ranson, City of York Council’s assistant director of economy and asset management, said: “We are not complacent about the state of the economy.

“We recognise the importance of inward investment, bringing forward developments and making sure there is a skilled workforce to meet employer needs so the local economy has a robust future.